After finishing his research internship in our lab, Brian Bingen started his PhD training in 2010. He has been focusing on the underlying mechanisms of cardiac fibrillation. In 2012, he received a Dekker grant (2012T023)from the Dutch Heart Foundation, which allowed him to study the pro-arrhythmic mechanisms of cardiac hypertrophy, including means to treat cardiac arrhythmias through genetic modification.

Late 2013, Circulation published an interview with Brian, in which he explains the aim of his research.

Sometimes he changes his white lab coat for a different white coat, which resulted in winning the National Judo Championship (<100 kg) on October 21st 2012. 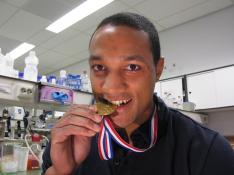